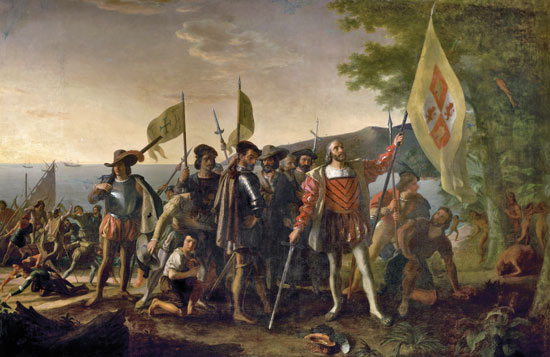 When our Order was founded in 1882, in another time when anti-Catholic and anti-immigration hostilities ran strong, the American public embraced the famous explorer, our Order’s namesake, Christopher Columbus.

In recent decades, however, Columbus has become a figure of controversy, and some accuse him of genocide and the institution of the slave trade. A popular view today is that Columbus is responsible for countless atrocities against the peoples who occupied the Americas before his arrival. The supporters of this view seek to eliminate or rename Columbus Day and remove statues and paintings of him.

This view of Columbus, however, is inaccurate. As explained by retired Stanford professor Carol Delaney, “His relations with the natives tended to be benign. He liked the natives and found them to be very intelligent. He also described them as ‘natural Christians’ because they had no other ‘sect,’ or false faith, and believed that they could easily become Christians if they had instruction.”

(Columbus wrote that the native peoples should be educated in the Christian faith before they were baptized.)

The genocide accusation arises from the deaths of many natives from diseases which were introduced by Europeans to a population that had no previous exposure, and therefore was particularly vulnerable to them. As unfortunate as this event was, it was not intentional. (Columbus did not seek to find a new world, but to find a new route to the Orient, which had previously had some contact with Europeans.)

Indeed, many of Columbus’s new critics blame him for everything bad that happened to the prior occupants of this hemisphere.

Our Order’s website has many resources about our patron: see Honoring Our Namesake: Celebrating Columbus and Columbus Day and other resources linked there.