After Fr. Marinelli’s opening prayer, Foster opened the ceremony with brief remarks educating those in attendance on the vision our founder, Blessed Michael J. McGivney, who wanted to create an order that would support Catholic families that were suffering from discrimination and financial hardship. He closed describing how the Knights of Columbus is a brotherhood, in service to the Catholic Church, bound together by our principles of Charity, Unity and Fraternity.

Bohn then presented on the role of Charity in our order, raising a crucifix while describing how the greatest act of Charity the world has ever known is the sacrifice of Jesus Christ, who freely and willingly offered Himself for us on the cross. He closed his initial remarks informing the candidates that Charity is a priceless gifted placed by God in the human soul to measure man’s allegiance to his Creator.

As the Presenter on Unity, Slebodnik emphasized how being a Knight of Columbus means possessing unity in purpose and action, which comes from our shared Catholic faith and the grace of the Holy Spirit. He continued by describing how increasing unity in our Church and our families is one of the great missions of the Knights of Columbus. He concluded his section, with the help of Hand, using fibers and a cable to demonstrate the power of unity.

In the lesson on Fraternity, Blaser described how, united by Baptism and the Eucharist, Knights of Columbus stand ready as brothers to bear another’s burdens, assisting each other through prayer, counsel and practical support. He closed emphasizing how the Knights of Columbus has been, and always will be, a brotherhood that has a special relationship with its priests, whose ministry makes Christ present to us in the Eucharist.

Foster then explained our fraternal greeting, “Vivat Jesu,” and the watchword of our order, “Tempus Fugit, Memento Mori,” and led the candidates in professing their commitment to the principles of our order. He then introduced Bohn, who delivered a discourse on the Rosary, invoking the Blessed Mother’s intercession for the sanctity of human life, for faithful marriages, for decency and purity in our world, and for justice and compassion for the downtrodden.

GK Terranova, with the assistance of PGK Hand, then invested our new brothers with their rosaries and pins.

After Fr. Marinelli delivered the closing prayer, asking for our Lord’s intercession on behalf of the victims of the 9/11 tragedy in 2001, Foster closed the formal session, turning the evening over to GK Terranova, who noted the ceremony was dedicated to the newly established Hispanic Roundtable for Jubilee Council 3294. District Deputy John Rossi then congratulated our new brothers before those in attendance welcomed them over light refreshments. 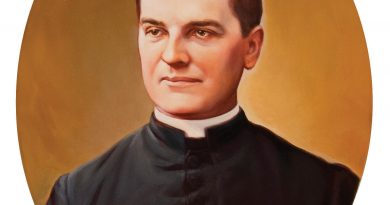 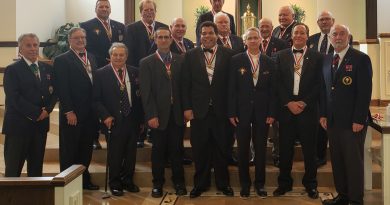